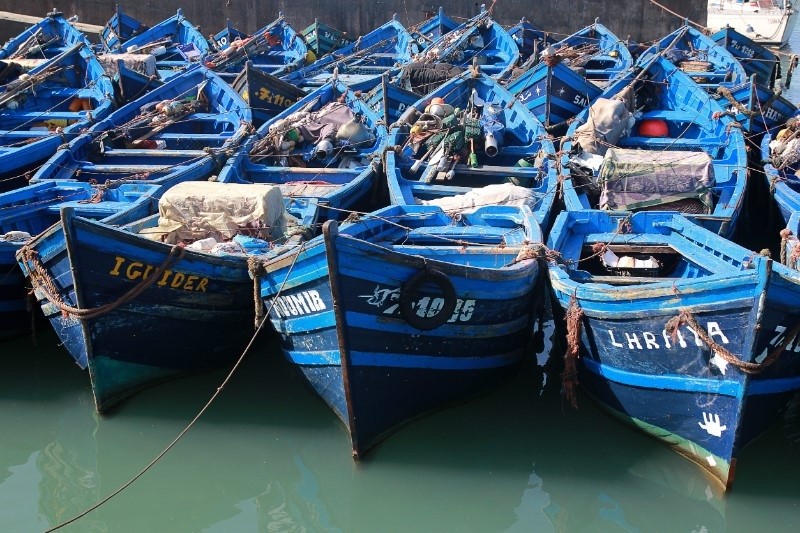 After breakfast we walk to the old town of Essaouira [Essaouira-travel-guide-1079514] (our hotel is situated in the 'new' part of town). At the town gate our group plits in to two, half go shopping, me and four others go and take a look in the harbour. It's a nice small fishing harbour with lots of small blue boats (and some yellow) and also a couple bigger fishing trawlers. On the end of the harbour area is a restaurant called 'Chez Sam', it's closed this early but me and Cynthia want to try and have dinner there tonight. The others don't like the idea very much because the building looks a bit shabby, I peeked through the window and the inside looks nice and tidy to me.

We walk to the town gate, a real fortification complete with the big cannonry on the wall. 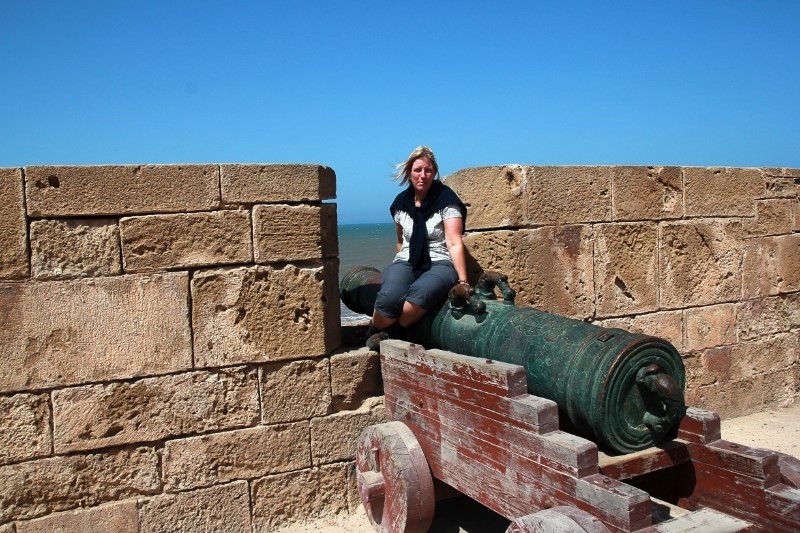 After a small walk on top of the wall the group splits up again, three go have lunch somewhere. Cynthia and I are not hungry yet so we go on exploring the town.

Prayer service in the mosk is done and there are a lot more people in the streets, we see a medicine man trying to sell his special ointments,I think he has something for every ailment. We walk through some narrow streets untill we come to the old jewish section (Mellah) A big part on the outside, near the city wall is weathered, collapsed, burned and partially demolished. It's a pity to see it like this but I think they will rebuild this part in time. It's probably caused by the residents leaving and nobody taking care of the houses.

We walk around the old town some more, drank some tea then went to the beach area for a nice cold beer (finaly!) Then back to the hotel for a bit.

Later that evening Cynthia and I went back to Chez Sam for dinner. The restaurant is open and almost full, we managed to get a table but it would have been better tomake reservations as many others did. Most tables have the reserved sign on them. The inside looks very nice, not shabby at all, actually quite chic. We had a lovely dinner. No disco tonight (or gnawa) we are pretty tired so straight back to the hotel.