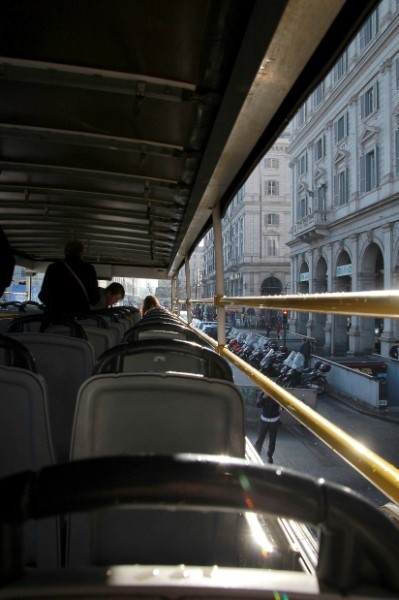 After breakfast me and my mom went to find the open hop-on hop-off buss to go with the rome Omnia card. We knew to look for a yellow bus but it took us some time to find the right bus stop as they don’t have a sign as most other hop-on hop-off companies. It turned out to be across the street from the train station (Termini) on Via Giovanni Giolitti (for those planning to use the Omnia card on their trip) To use the skip the line ticket option we had to join a group tour at a set time so we only reserved for the Vatican museum and took the gamble at St.Peters. We had some time before we had to get to the meeting point so we started exploring on our own.

At St.Peters there was a long line of people waiting to get in so we almost regret not getting the tour. 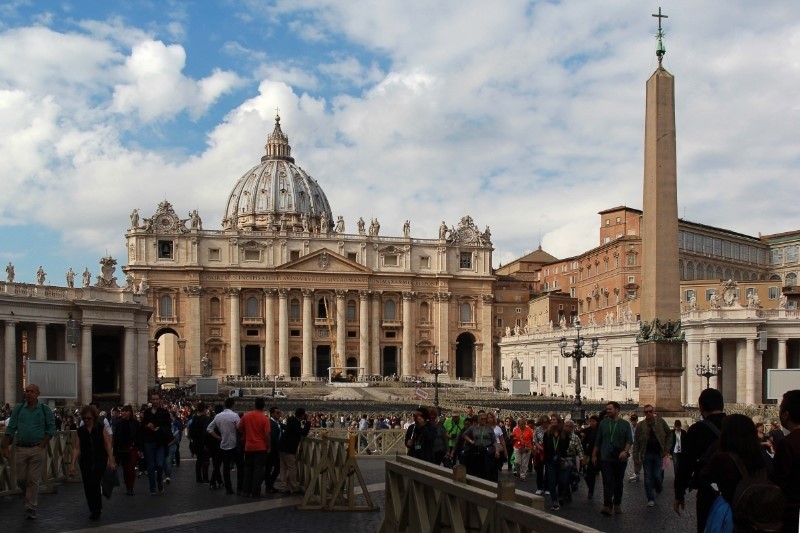 But as we planned to visit the basilica after the museum we would just get in line then. Another thing on the list was Santi Michele e Magno (Kerk der Friezen) I located it on google maps but it still was a bit hard to find it in real life. There was only a small sign on the wall and stairs going up between the buildings, no real indication of there being a church. On top of the stairs a big steel gate and behind it a courtyard and indeed a building looking like a church. Sadly the gate was closed, a man sitting at the top of the stairs told us it had been open every day up until now, must be our luck.

At 12:00 we had to go to the meeting point. While waiting we saw other groups pass by, following the person with the flag. A boy waiting with us asked his dad why those people were following the flag, not realizing he was about to do exactly the same. 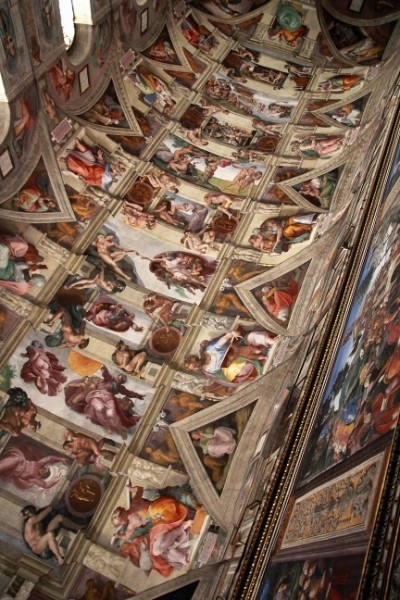 Our flag was a fast walker though and I felt sorry for the lady with the walking cane who could not keep up. We skipped the line on the other side of the street. So this is what they mean by better use a skip the line ticket for the Vatican museum. The row of people waiting to get in was huge! We on the other hand could use the group entrance which was empty (!) Inside we got our tickets and could go on by ourselfs. We didn’t plan to see all the rooms so we skipped the Egypt exhibition and took the short route to the Sistine chapel, our main reason for visiting the museum.

We pass through various lavishly decorated rooms, it’s all so much you fail to see the beauty of it all. Walls, floors, ceilings everything is covered in paintings tapestries tiling everything telling a story. 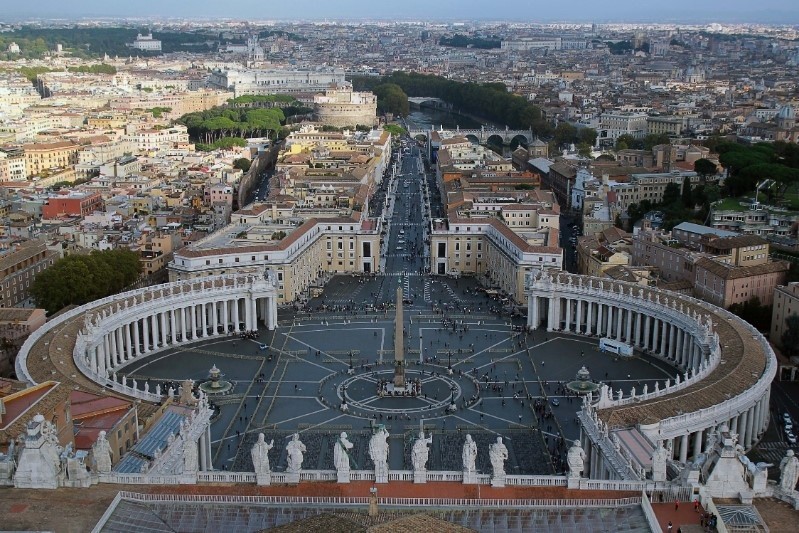 Finally we enter the Sistine chapel. Here no photo’s! Inside I’m actually a bit disapointed , it’s much the same as the rooms we already passed, too much of everything! (Critics are gonna hate me for saying this) The paintings are beautiful on their own but stashed together like this the beauty fades, and my first thought of the wall paintings was: color blue on sale or something? As for no Photo’s; I just couldn’t help myself … nearly got myself kicked out by an angry guard but he didn’t make me erase the picture so …

Back at St.Peters the huge rows had reduced to a lot less and within 5 minutes we passed the security gates. Inside it was crowded but not as much as I feared. We had to shuffle along to see Michelangelo’s Pietà and had to wait a bit at the elevator going up to the dome but nothing bad. My mom went with me up the dome which surprised me since she has a fear of heights. She did enjoy the view and actually went right up to the fencing, not looking down is the magic trick she said.

I planning to use the skip-the-line option on my next visit to the eternal city since rows are huge anytime so I miss the Vatican Museums. I got into St.Peters church pretty quick though. I miss the view from the dome and it looks awesome.

The paint (pigment) color blue was very expensive many years ago so excessive use of it was a status symbol of sorts. It showed you had wealth. It's also a symbolic color so was used in many religious paintings . . . and then it is useful for both sky and water so I can understand why you felt overwhelmed by blue. I found the tremendous number of people in the Sistine Chapel to be intimidating. We could hardly move for the crowds. Not a pleasant experience but glad we've seen it. In future, I'll just enjoy photos of it, including yours.

My grandson and I went to Rome and he wanted to see the Sistine chapel, so our driver/guide got us a guide and that is the way we skipped all the lines - no line to get into St. Peters, but it was not Wednesday https://grandmarmed.travellerspoint.com/8/

Sistine chapel is a must see, crowds certainly unpleasant but you just have to see it. The blue and wealth make sence, but it's all a bit too much for my taste. If you get the chance climb the dome, views are great!